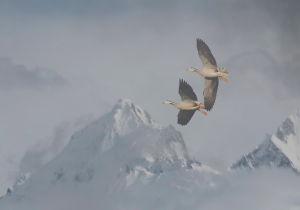 Dates and times: Friday mornings from 7:30—9 AM

The Wild Goose Qigong system contains Chinese longevity exercises and meditations that originated in the Kunlun Mountains of Western China many centuries ago. The system is also known as Kunlun Dayan Qigong. Long a secret, Wild Goose Qigong became widely practiced in China in recent decades and is spreading to the rest of the globe. The exercises represent the daily routine of a wild goose—a bird of longevity, stamina, and high energy—and are effective at helping treat disease, increase energy, improve mental clarity and brain functions, and maintain general fitness. Matt and Robert know more than 20 movement forms in Wild Goose Qigong—several years worth of instruction. In addition, there are some 15 meditations taught in the system and many of these will be taught as well, over time.

Each class consists of warmups, followed by instruction and practice in one or more Wild Goose forms, and ends with a meditation.

The curriculum will be a varied sequence of short and long forms, with a particular focus on the foundational form called The First 64.

Some of these forms are fairly short and can be learned at a basic level in only a few weeks. Other forms are long and complex and take several months to learn the movements. Mastery of some of these forms takes years of practice, as there are many subtle details to incorporate. Wild Goose Qigong is a lifelong practice for health and longevity.

This quarter we will be focusing on the 8 Character Back Stretching Qi Gong, along with the 1st 64 form.

New students are welcome to join on the first class of each quarter year; that is the first Friday in October, January, April, and July. Qigong experience is useful, but not required

With 14 movements, 8 Character Back & Waist Stretching Qi Gong is a relatively short form in the Wild Goose Goose system.  However, like all forms in this system, a little bit goes a long way toward health.  This qi gong is designed to open the spine, waist, and hips, allowing for greater circulation throughout the hips and pelvic area and into the legs.  With a blend of vigorous shaking and soft movements similar to tai chi, the whole body is invigorated, resulting in greater vitality, more energy, and targeted healing for the back and legs. 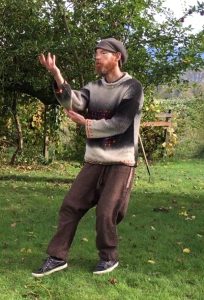 Matt Van Dyke is an Acupuncturist, Herbalist, and Qi Gong practitioner clinically focused on maximizing quality of life and longevity. Matt is especially interested in helping to train patients and students to tap into their own innate potential and to facilitate new landscapes of healing. Matt is a student of Dr. Zhang Dong Xun OMD, having studied Jingui Golden Shield Qi Gong and Fit 150 Intended Evolution for the past 20 years. He has been teaching Qi Gong since 2007, both private classes, and at Middle Way Acupuncture Institute. Matt has also studied Dayan Wild Goose Qi Gong with Robert Bates religiously for the last 7 years. Together Matt and Robert have delved deep, studying and practicing over 20 forms and meditations of this vast system. 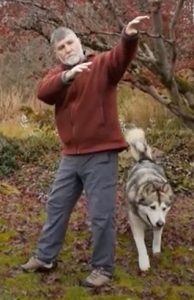 Robert is a healer and teacher of healing based in Bellingham, Washington. A 1990 graduate of Southern California College of Chiropractic, he has practiced in Washington State since 1992. He has taught many Qigong courses since 1997. He earned his Master of Medical Qigong certificate in 2001 from Jerry Alan Johnson at the International Institute of Medical Qigong. He has been practicing Wild Goose Qigong since 1999 and has taken Wild Goose classes and workshops from noted teachers Michael Tse, Bingkun Hu, and Paul Li. He currently teaches Medical Qigong at the Middle Way Acupuncture Institute. In addition he teaches workshops in Lymph Drainage Therapy and Fluid Articular Release for the Chikly Health Institute, an international teaching organization based in Arizona.

This article was posted in Health, Meditation, Qi, Qi Gong. Bookmark the permalink. Follow comments with the RSS feed for this post. Both comments and trackbacks are closed.
360-466-1800