Acupuncture while Floating? Floatupuncture is Born. 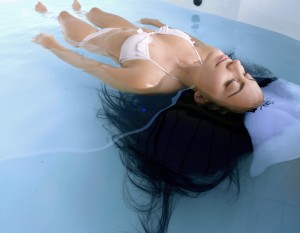 Those of us who are Acupuncture junkies know the relaxing and transformative power of placing tiny needles at various points in the body. I mean, I should know, I’m an Acupuncturist. The whole reason I got into this profession is because the first time I had acupuncture done on me, I felt euphoric. I felt high. I felt blissed out. That from just a few needles? No drugs? No side effects? No hangovers? And it’s good for me? I was sold.

Fewer of us know the relaxing and transformative power of floating in a womb-like environment such as the Floatation Tank (aka Sensory Deprivation Tank, Isolation Tank – though calling it such things is out of vogue, you might scare off potential clients). I’d actually experienced Floating long before I had ever experienced Acupuncture. I was attracted to the ‘instant-samadhi’ that people were describing who floated in the tank. A rocket powered boost for your meditation practice. For those who don’t know, to Float, you are suspended on an extremely buoyant epsom salt solution in a darkened chamber, with the ambient sound still, and the ambient temperature exactly right so that instead of feeling the water, the water feels like part of your skin. Or rather, your skin disappears and the boundaries between yourself and your environment begin to fade. Relaxation squared, a return to the womb. Stress melts away, pain melts away, the mind clears and creativity is enhanced.  Sound intriguing? It is.

So for a long time I’ve been speculating on the potentially synergistic effects of Floatation + Acupuncture. I mean, they’re both amazing in their own right, but sometimes in Acupuncture sessions I have patients who can’t quite get comfortable on the table because of their chronic or acute pain. Or perhaps they are easily distracted by the construction noises outside. And with floating, sometimes it takes a while to get relaxed and turn off the mind when you’re in the tank. So, I thought, why not use them together and see what happens? And it works, it works well. But what about the logistics? Surely you can’t get two people into the tank to have an acupuncture session!? And what about the needles, won’t the salt make the stimulated points sting (just like having a cut or an abrasion would)? The Solution: …Enter the press tack. The press tack is a super nifty invention that takes an intradermal needle (ie a very small, fine needle) and a piece of tape, and ‘tacks’ the specified acupuncture point. The procedure is painless (even more so than regular acupuncture), the needle is still inserted though not very deep, allowing more freedom of movement while still stimulating the point. The tape also protects the skin from potential irritants, like epsom salt.

Arrive 30 minutes before your scheduled Float (at Afloat, Bellingham’s premier Floatation facility), I, the acupuncturist (and herbalist), will run you through a few Chinese Medicinal Diagnostic tests (including the Acu-Graph, which will measure the state of energy flow through your meridians), then proceed (cake) to place a certain number of press tacks in strategic places on your body, usually on your limbs. You will then, if this is your first time Floating, have a brief primer with Dan Martin (Float Guru), who will guide you through the ins and outs of Floating. Then, after a brief shower, which will not interfere with the press tacks, your session of bliss will begin! For most first time Floaters, an hour is sufficient, but for the veterans Dan has longer float sessions available. The press tacks may be removed by you at anytime following the Float session. You can even keep them on for up to 24 hours to extend the therapeutic effects. Are you sold? I am…

To book your combined Floatupuncture session, please contact Matt Van Dyke (that’s me) at 360.466.1800 or matt@mattvandykelac.com

Check out Dan’s webpage, Afloattherapy.com, for more info on Floating

This article was posted in Uncategorized and tagged acupuncture, Floatation, mental health, pain, Sensory Deprivation, stress. Bookmark the permalink. Follow comments with the RSS feed for this post. Both comments and trackbacks are closed.
360-466-1800